Dorette jewellery never weighs heavily on fingers, never scratches necks or pulls on ears.
The multi-coloured stones, both modest and precious, brut diamonds and glass set in gold and silver, diffuse a singular murmur and are always cheerful company.
Each one is different, neither ancient nor modern, they are light objects that inspire pleasure, wit and affection. 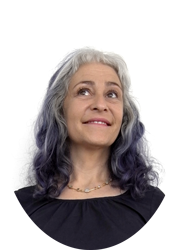 Catherine Lévy, who created Dorette, was born in Paris where she has lived and worked ever since. At a very young age, she would make jewellery from what was close at hand: chick peas from the kitchen, pebbles extracted from the gravel, rabbit poo she’d collect from the mountains, or snail shells (that also came from the kitchen). These tendencies naturally directed her to Les Ateliers (l’Ecole nationale supérieure de la creation industrielle), where she studied design. She then joined forces with Sigolène Prébois to create objects for homes, signed Tsé & Tsé associées. Their vases, garlands, plates and bowls have been successful all over the world for twenty years (www.tse-tse.com).
Catherine has always travelled extensively, especially to India. Dazzled by the profusion and the beauty of jewellery worn in the streets of the cities and villages, she dreamed of models mixing Indian techniques and traditional forms from French provinces, and imagined large hoop earrings, ancient wedding rings, seven-band bracelets, grigris and nose rings. She searched for, and found, precious and semi-precious stones, coarsely cut, that she chose for their colours and forms rather than for their value. The first pieces made in Indian workshops delighted her so much that the pleasure she felt wearing them must have been contagious, because they aroused other people’s admiration and desire.